From Hunch to Breakthrough: How Keen Observation Led to Advanced Understanding, Further Study of Colorectal Cancer in the Louisiana Acadian Region

We couldn’t wait to talk to Jordan Karlitz, MD, FACG, Division of Gastroenterology, Tulane University School of Medicine, after he shared the news in an email about the impact publication in Clinical and Translational Gastroenterology has had on his career. His latest research involving the study of colorectal cancer in the Louisiana Acadian Region was published in Clinical and Translational Gastroenterology in October 2014 and has subsequently received widespread media coverage, which helped him secure a grant for further study. But even more importantly, according to Dr. Karlitz, is the opportunity for this research to continue to evolve and attract resources to increase colon cancer screening rates in this population.

Dr. Karlitz’s commitment to colorectal cancer awareness, screening and prevention is further evidenced by his research involving Lynch syndrome. At ACG 2014, he presented Oral 27, the first population-based, statewide study in the U.S. to quantitate Lynch syndrome screening rates by microsatellite instability and immunohistochemistry and assess the timing of these results in relation to surgery. The results suggested that in young colorectal cancer patients (age 50 and under) who may be at increased risk, screening rates for Lynch syndrome are low, and results are infrequently available prior to colonic resection. Rural location and care at public hospitals are inversely correlated with testing, suggesting disparities in access to specialized services. This data was recently published in the American Journal of Gastroenterology.

In this Q&A, we focus on the evolution of a “hunch” Dr. Karlitz said he had regarding his patients, which led to his research of colorectal cancer in the Louisiana Acadian region.

GI FIVE: What was the genesis of your research? What sparked your interest in pursuing this project?

Dr. Karlitz: When I started working at Tulane, I noticed that there were a lot of young colorectal cancer (CRC) patients with French last names, particularly in our Charity clinic. When I reviewed the scientific literature on the Cajun population (who are of French descent), I discovered that they were a founder population of several genetic diseases, including Tay-Sachs and Usher syndrome. Since CRC can be hereditary in a Mendelian fashion, in a significant percentage of cases (as in Lynch syndrome), and founder effects have been demonstrated for hereditary CRC in other populations with high rates of CRC, I decided to study the incidence of CRC in the Acadian region of Louisiana (where the majority of Cajuns reside) to see if there was an increased rate of CRC. If the rates were high, this might suggest a founder effect for hereditary CRC or, alternatively, some other risk factor (i.e. environmental) that might be present in this region. After searching the internet to see if there was an Acadian cancer registry, I came across the Louisiana Tumor Registry, which is based at the LSU School of Public Health. It turns out that this is only several blocks from my office, so I walked in, introduced myself and told them what I was interested in. They were more than happy to help and after several meetings with the head of the registry and other personnel, we all decided to work together to study this region.

GI FIVE: What is a founder effect?

Dr. Karlitz: A founder effect occurs when a new population originates from a small subgroup of a larger population. This can result in decreased genetic variation in the new population, which may have a nonrandom sample of genes from the original population. If a mutation associated with disease is introduced into the founder population, this can lead to an unusually high frequency of inherited diseases, including certain malignancies that may be heritable in a Mendelian fashion such, as colon cancer and breast cancer.

GI Five: For those who may not be familiar, please tell us a little about the Acadian parishes and the Cajun population.

Dr. Karlitz: The Acadian parish region is located in southern Louisiana and has a total population of approximately 1.2 million. It has been estimated that there are approximately 500,000-700,000 Cajuns residing in this region. The Cajun population was established in the 1700s, when French settlers (Acadians) in Nova Scotia, Canada, left the region due to oppressive English rule. Many Acadians settled in LA and were joined by others who emigrated from France. Compared with other U.S. populations, Cajuns have had strong geographic ties to a specific region and have maintained a distinct community with a preserved language, Cajun French. 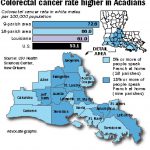 GI FIVE: Describe your study design and the key findings of your research.

Dr. Karlitz: We used French language census data from 2000 to identify an 18-parish region with increased rates of French speakers at home as a marker for the Cajun population. We also looked at a 9-parish subgroup of the 18 parishes with higher numbers of French speakers. We subsequently looked at CRC incidence rates in the9 parishes, the 18 parishes, Louisiana and the U.S., and stratified by race and gender. When we did this, we saw that CRC rates were disproportionately high in the white population, and particularly white males, compared to statewide and U.S. rates. In fact, in the 9-parish region with the most French speakers, CRC rates in white males were 19% higher than LA and 37% higher than U.S. rates. If the 9-parish region were considered a “state,” white males would have the highest CRC incidence in the United States by 11% compared with other white male populations. In young patients under age 50, there also appeared to also be a trend of increased CRC in the Acadian region compared to statewide and U.S. rates. CRC rates in African Americans were very high in the Acadian parishes, but unlike the white population, the rates were not disproportionately high compared to statewide rates.

We also looked at other cancers that share environmental exposures with CRC, because if rates of both CRC and non-colonic malignancies are high in the Acadian region, it may suggest a shared environmental predisposition for the development of malignancy. When we looked at breast cancer, pancreatic cancer, lung cancer and all malignancies combined in the white population, in contrast to CRC, these cancers were not disproportionately higher than the statewide rates . We also looked at smoking, obesity and health insurance rates in this region and there appeared to be no difference in these variables with regard to Louisiana rates.

GI FIVE: Explain the significance of your findings and how your research may further advance understanding of colorectal cancer.

Dr. Karlitz: Our data suggests that there is something unique about the white population, and particularly white male population, in the Acadian parishes, where French is more frequently spoken, with regard to CRC. As the Acadian region is home to the Cajuns, a known founder population, it may be that there is a founder effect for a hereditary form of CRC in the region. Alternatively, or in conjunction, there may be an unidentified, concentrated CRC environmental risk factor in the Acadian region. Clearly, further study is needed and I was fortunate enough to have just received funding from LA CaTS (Louisiana Clinical and Translational Science Center grant) to do microsatellite instability (MSI) and immunohistochemistry (IHC) testing on banked tumor specimens from this region to look for evidence of Lynch Syndrome. After this is complete, we hope to expand the study to look at different environmental variables in more detail (including obesity, smoking, and dietary) and potentially perform germline genetic testing for Lynch syndrome and other hereditary syndromes including familial adenomatous polyposis (FAP), attenuated FAP and MUTYH-associated polyposis. As CRC has never been studied in this population, the potential may exist to identify novel susceptibility genes for CRC that could be important in other populations as well that share similar French ancestry. It is also possible that we could discover a novel environmental risk factor for CRC.

It is important to note that the information we have at this point is ecologic in nature with data at the population-based level only. So it is possible that many of the people actually diagnosed with CRC in the region are not of Cajun ancestry–and clearly more detailed study will be needed.

GI FIVE: Has what you learned from the study impacted your practice of medicine—has it changed your approach to patient care or the way you communicate/treat your patients?

Dr. Karlitz: It certainly has. I have learned that not only is it important to approach each patient as an individual, but that it is also critical to look at disease patterns among groups of patients that you may see in a clinical setting over time. By doing this, you may able to see something new, or from a different perspective, that may spark a research idea, as it did in my case.

GI FIVE: Share some of the impact your findings have had so far and what you hope to achieve in the future.

Dr. Karlitz: After the paper was published in CTG, there were multiple press releases to the community, which led to multiple media requests from newspapers and radio stations. It was a real domino effect that has helped attract attention to this region and we are hoping that this, in turn, will also attract resources to increase colon cancer screening rates. In this light, the LSU School of Public Health and Louisiana Tumor Registry are actively looking for sources of funding, including CDC opportunities, which may help us to devote increased resources for CRC screening to the underserved and at-risk populations in Louisiana, including the Acadian parish region. We also have our first state Colorectal Cancer Roundtable meeting coming up and the information from the CTG paper will be a critical topic of discussion.

GI FIVE: Please describe the importance of the Louisiana Tumor registry to the study.

Dr. Karlitz: The Louisiana Tumor Registry is a a high-quality statewide population-based cancer registry, participant of both the NCI’s Surveillance, Epidemiology, and End Results (SEER) program and one of the 10 Specialized Cancer Registries of the Centers of Disease Control and Prevention’s National Program of Cancer Registries. I think it is important for clinicians to be aware of the wealth of information that is available from cancer registries and that they can be the starting point for important studies identifying at risk populations.

GI FIVE: What advice do you have for your colleagues?

Dr. Karlitz: Iff you have a strong hunch about something or an idea that you want to develop, make sure you do everything you can to try and bring it to fruition. Obviously, this is easier said than done, particularly given how busy healthcare providers are, but if you are able to push it through, you may end up being surprised by the results. In our case, even though at this point the exact cause of the high CRC rates is not known , we have been able to identify a high-risk population that we may be able to attract resources to in order to intervene to prevent the development of cancer. And this is truly a satisfying feeling.

This article first appeared in May 2015 issue of the ACG Update as a GI Five. The GI Five is a Q&A feature of the ACG Update created to provide readers with insight on a variety of timely gastroenterology-related topics that impact ACG members and their practices at all career levels. From clinical to practice management to national affairs and even health and wellness topics to help you achieve work-life balance, the GI Five will evolve based on your feedback. In an effort to provide you with the most useful information, we welcome your suggestions for topics, members or other people to feature in upcoming GI Five columns. Please email ACG Update Assistant Editor Jacqueline Gaulin at jgaulin@gi.org with your suggestions.