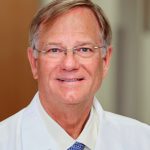 Dr. Bacon’s undergraduate work was done at the College of Wooster in Wooster, Ohio, and his medical degree and training were obtained at Case Western University School of Medicine in Cleveland, Ohio.

Dr. Bacon has had an extensive research interest in hepatic iron metabolism and was a member of the research team which discovered the gene for hemochromatosis, HFE, in 1996. He has had extensive experience in a variety of laboratory research protocols involving experimental iron overload, iron-induced hepatotoxicity, iron-induced organelle damage, and the role of iron in fibrogenesis. He was continuously funded by the NIH from 1982 to 2007 for work on iron-induced hepatotoxicity and hepatic fibrogenesis. His primary focus at the present time is predominantly in clinical hepatology in the field of hemochromatosis and iron overload, nonalcoholic steatohepatitis, and chronic hepatitis B and C.