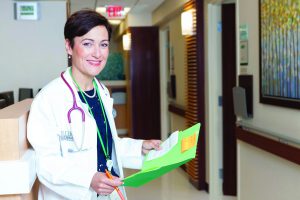 Maria T. Abreu, MD, receives the 2016 ACG Minority Health Care Award, for her excellence in clinical patient care, research, and teaching with a focus on improving the digestive health of Latin-American and Hispanic-American communities.

About Dr. Abreu: Maria T. Abreu, MD, is a physician-scientist in gastroenterology with a focus in inflammatory bowel disease (IBD). She completed her medical degree at the University of Miami, Miller School of Medicine in the Honors Program in Medical Education. While in medical school, she served as Student Council President and was inducted into the Iron Arrow Honor Society. Her postdoctoral training included an internship and residency in medicine at the Brigham and Women’s Hospital in Boston, Massachusetts; clinical and research fellowship in gastroenterology at the University of California, Los Angeles (UCLA), and training in molecular and cancer biology at UCLA. She was Director of the IBD Center and Associate Professor of Medicine at the Mount Sinai School of Medicine, NYC, prior to returning to the University of Miami as Chief of Gastroenterology and Professor of Medicine. She is currently the Director of the Crohn’s and Colitis Center at UM, Professor of Medicine and Professor of Microbiology and Immunology. The Crohn’s and Colitis Center is a multidisciplinary clinic with dedicated space for consultations and infusions of medications for patients with IBD.

Dr. Abreu is a native Spanish speaker and regularly speaks on the topic of IBD in Latin America or hosts Latin American physicians in mentoring programs to help these gastroenterologists manage the rising number of IBD patients in their countries. She began a program at DDW entitled “Lo major de DDW” for Latin American doctors to hear native Spanish speakers summarize the highlights from DDW—the session is generally standing room only. Since returning to Miami, Dr. Abreu has dedicated her translational research efforts to studying the rising incidence of IBD in immigrants from Latin America and in Hispanic-Americans. She and her colleagues have described the phenotype of Hispanic patients in Miami developing IBD. Most recently, she has been awarded an NIH grant to study the genetic basis of IBD in Hispanics. Her group has collected one of the largest number of Hispanic samples in the US. This research has implications for the growing number of Hispanics around the country in terms of edifying the risk factors for IBD in Hispanic patients.

Dr. Abreu is committed to helping the next generation of physician-scientists and increasing the pipeline of minority researchers. She is a co-investigator on an NIH grant to host minority students in her laboratory in the hopes of stimulating a desire to stay in gastroenterology and to provide the tools to make them successful. Dr. Abreu’s laboratory-based NIH-funded research focuses on colitis associated cancer, stem cells, and the microbiome. She has also been a contributor on studies to explore genetic differences in colon cancers in minority patients.

Dr. Abreu is a Diplomate of the National Board of Medical Examiners, the American Board of Internal Medicine, and the American Board of Gastroenterology and a Fellow of the American College of Physicians. She was elected to the American Society for Clinical Investigation in 2010 and is a member of the Crohn’s and Colitis Foundation of America (CCFA). Dr. Abreu is a member of the American College of Gastroenterology (ACG) and has served on the Educational Affairs Committee, the Practice Parameters Committee and the Women in GI Committee, in addition to serving as a Course Co-Director for the ACG’s 2005 Annual Postgraduate Course. She is the current Chair of the American Gastroenterological Association (AGA) Institute Council. As Chair of the Council, she leads the group of academicians that plan the annual national meeting and sets policy for AGA. Dr. Abreu has also served as Chair of the Underrepresented Minorities Committee of the AGA. She was the 2014 President of the Florida Gastroenterology Society. Her most recent appointment is as the Deputy Chair of the International Organization for the Study of Inflammable Bowel Disease (IOIBD), where she serves as a Member-at-Large through 2018. Additionally, she is listed in Castle Connolly as one of America’s Top Doctors.

Dr. Abreu is a frequent speaker at national and international symposia on basic science and clinical topics. Dr. Abreu has authored more than 100 peer-reviewed articles, books, chapters and reviews. Additionally, she has served as an editorial board member for Inflammatory Bowel Diseases and Gastroenterology & Hepatology News; former editor for the Journal of Immunology; former Associate Editor of Journal of Crohn’s & Colitis and ongoing as a reviewer for several other prestigious journals.

About the Minority Digestive Health Care Award: This ACG achievement award recognizes an ACG Member or Fellow whose work in the areas of clinical investigation or clinical practice has improved the digestive health of minorities or other underserved populations of the United States. These efforts can be shown by community outreach activities through clinical or educational programs, or research in an area of digestive disease that negatively impacts minority populations such as colorectal cancer, hepatitis B and C, cirrhosis and other GI cancers.