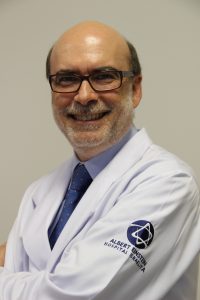 In 2010, he became a member of the International Organization for the study of Inflammatory Bowel Disease (IOIBD). He is also a member of the advisory board and/or reviewer for many scientific journals including The American Journal of Gastroenterology, Digestive Disease and Sciences, Journal of Crohn’s and Colitis, Inflammatory Bowel Disease, and Clinics. Dr. Steinwurz received the 2010 Geraldo Siffert Award for the Best Abstract presented at the Brazilian Week of Gastroenterology. In 2012, he was honored with the ACG International Leadership Award and in 2014, he received the ACG William D. Carey Award. He was elected General Secretary of the Panamerican Crohn’s and Colitis Organization (PANCCO) in 2014. In 2016, he became the Coordinator of the International Relations Committee of the Brazilian Federation of Gastroenterology, as well as Emeritus President of the Brazilian Association for Crohn’s and Colitis, and was elected Secretary General of the São Paulo Gastroenterology Society.