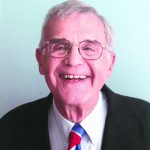 About Dr. Farmer: Richard G. Farmer, MD, MS, MACG, was born in 1931 in Kokomo, Indiana, to a Quaker family. He attended Indiana University and received his medical degree from the University of Maryland and a Master of Science degree from the University of Minnesota. He trained in Internal Medicine and Gastroenterology at Milwaukee County Hospital and Mayo Clinic. He served in the Medical Corps of the U.S. Navy at Great Lakes, Illinois. Dr. Farmer was at the Cleveland Clinic for 30 years and was Chief of Gastroenterology for 10 years and Chair of Medicine for 16 years. He was on the faculty at Georgetown University in Washington, DC, for 12 years and at the University of Rochester (NY). Dr. Farmer began work at the U.S. State Department on January 1, 1992 — one week after the breakup of the Soviet Union into 15 separate countries. The Secretary of State chaired a meeting of 35 countries three weeks later. The U.S. was given responsibility for health services and Dr. Farmer was the coordinator of 30 health professionals from 14 countries. They were given a NATO plane and traveled 10,000 miles inside the former Soviet Union to evaluate the status of the medical services. Following the survey, reports were made to Congress, the UN and the WHO, and programs were developed. He also developed continuing medical education programs in Russia and Eastern Europe from 1992 to 2003.

He was Medical Director of the Eurasian Medical Education Program, a joint collaboration with the American College of Physicians from 1997 to 2003. These activities resulted in more than 70 visits to Eastern Europe and the former Soviet Union. Dr. Farmer has published more than 250 journal articles over seven decades (1959-2010), with primary emphasis on inflammatory bowel disease, and edited six books, including Clinical Gastroenterology (two editions). He has given formal lectures in 40 countries. He was appointed to the National Commission on Digestive Diseases in 1977 by the Secretary of Health and Human Services. The commission developed the Digestive Disease Institute at the Institute of Health.

Dr. Farmer was elected (lifetime) to the Institute of Medicine, National Academy of Sciences, in 1983. He received a jubilee medal from Charles University, Prague, in 1998 for his contributions to health and the Czech Republic. He was President of the Association of Program Directors in Internal Medicine, and subsequently received the Founder’s Award for “a lifetime of service dedicated to the achievement of excellence in medicine.” He was awarded Mastership in the American College of Physicians, where he had served as Governor and Regent. He was President of the American College of Gastroenterology in 1979 and subsequently was awarded Mastership. In 2007, he received the American Gastroenterological Association’s Mentors Research Scholar Award.

From 2003 to July 2011 he served as Professor and Chief, Gastroenterology and Hepatology Division of the University of Rochester Medical Center in Rochester, NY. He is now Professor of Medicine Emeritus.