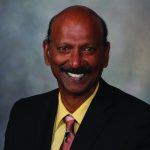 Santhi Swaroop Vege, MD, MACG, is presently a Professor of Medicine, Director of Pancreas Group, and a consultant in the Division of Gastroenterology at Mayo Clinic in Rochester, Minnesota. He was born in India where he graduated from Guntur Medical School in 1975. He completed his internal medicine residency at the Government General Hospital and his gastroenterology fellowship at the Postgraduate Institute of Medical Education and Research in India. He did an additional year of research fellowship at the Memorial Sloan Kettering Cancer Center (1984-1985). During the years 1981-1995, he joined the academic faculty at Tata Memorial Center, Mumbai, where he was the head of Medical Gastroenterology from 1988 until 1995 and also the Fellowship Director. He was the national GI Fellowship Coordinator for GI Diplomate Fellowship in Gastroenterology for India for two years before he left for Mayo Clinic. He was also the head of gastroenterology at the PD Hinduja National Hospital in Mumbai. Subsequently, he joined the faculty at Mayo Clinic in Rochester, Minnesota in 2000, as a Consultant in the Department of Internal Medicine and then in Gastroenterology and Hepatology, and for many years he has been the Director of the Pancreas Clinic.

Dr. Vege has three and a half decades of experience as a staff physician in academic gastroenterology, with special focus on pancreatic diseases in general, and pancreatitis in particular. He has published more than 130 peer-reviewed manuscripts, text book chapters, systematic reviews, practice guidelines, and was a reviewer for many national and international journals, PhD dissertations and for academic promotions. He has conducted international consensus meetings, revised the classification, authored more than one guideline, and is in the process of preparing a technical review and high-value care on acute pancreatitis for two of the leading medical journals and organizations. Dr. Vege is also the recipient of an NIH grant on “Pentoxifylline in Acute Pancreatitis.”

He has served ACG in many capacities over the years, including actively recruiting ACG members from India. He has been a Fellow of the College since 1985, and has served on ACG committees including the Educational Affairs Committee where he helped plan the scientific sessions for several Annual Meetings. Dr. Vege has also served The American Journal of Gastroenterology (AJG) in many capacities, has published 24 papers in AJG, and is currently on the Editorial Advisory Board. He has participated in many national and international courses on pancreatic disorders and GI, given keynote presentations for various societies around the world, and was the visiting professor to many U.S. academic institutions. He has a large clinical practice at Mayo Clinic and has been recognized as a master teacher by internal medicine residents and GI fellows on many occasions.