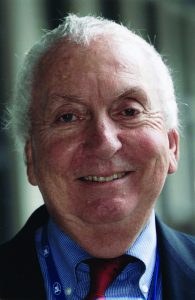 About Dr. Winawer: Sidney J. Winawer, MD, DrSc (hon), MACG, is internationally recognized for his contributions to the prevention and diagnosis of colorectal cancer, describing the developmental stages of colorectal cancer, defining familial high-risk groups, promoting screening, and demonstrating the reduction in incidence and mortality of colorectal cancer by removal of adenomatous polyps through his leadership of the National Polyp Study. This led to the concept of screening colonoscopy, which was introduced by the 1997 U.S. GI Consortium Guidelines Committee (later the U.S. Multisociety Task Force) which he co-chaired.

Dr. Winawer was Chief of the Gastroenterology-Nutrition Service and Chairman of the Cancer Prevention and Cancer Control Program at Memorial Sloan Kettering for 20 years, and Professor of Medicine at Weill Cornell Medical College. He initiated the Integrative Medicine Program and was head of the WHO Collaborating Center for the Prevention of Colorectal Cancer. He is an emeritus attending physician at Memorial Sloan Kettering Cancer Center in New York City.

Dr. Winawer has received many research grants, published more than 400 research articles, reviews and book chapters, and has been an international leader in colorectal cancer screening. This work has earned him many awards including the Memorial Sloan Kettering Alumni Award, the American College of Gastroenterology Master Award and Berk/Fise Clinical Achievement Award, the American Gastroenterology Association Distinguished Achievement Award in Basic Science and Fiterman Award, the American Society for Gastrointestinal Endoscopy Rudolf Schindler Award, the American Cancer Society/American Society of Clinical Oncology Award, the John Wayne Clinical Research Award from the Society of Surgical Oncology, the Laurel Award for International Leadership from the Cancer Research & Prevention Foundation, the First Lifetime Achievement Award from The Prevent Cancer Foundation, a Recognition Award for Service to New York City from the Commissioner of Health, an honorary degree of Doctor of Science from SUNY-Downstate Medical Center, the Israel Cancer Research Foundation Founders Award and he was recently awarded the American Cancer Society Medal of Honor for Cancer Control.

He has been the editor of textbooks on colorectal cancer and co-author of Cancer Free, a book on cancer prevention written for the general public. His book Healing Lessons written after his wife’s death was reviewed by the New York Times and has been translated into several languages. Dr. Winawer helped Katie Couric plan, and appeared on, the NBC colorectal cancer series and also participated in the White House Colorectal Cancer Campaign kickoff in 1999.

After completing a GI fellowship on the Harvard Service of Boston City Hospital, Dr. Winawer served as a faculty member of Harvard Medical School. He belongs to numerous professional societies and has served as the President of the American College of Gastroenterology, was a founder of the NY Society of Gastrointestinal Endoscopy.